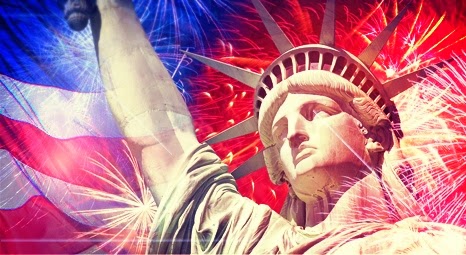 On July 4, 1776 our Forebears launched an experiment in self determination and self governance that was radical and . The Thirteen colonies that heretofore were part of the British Empire announced to the world that a new nation had been born, founded on a powerful idea-- the idea of freedom. This ongoing experiment adopted the name, United States of America.

I have always loved this lines from the preamble to The Declaration of Independence: "We hold these truths to be self-evident, that all men are created equal, that they are endowed by their Creator with certain unalienable Rights, that among these are Life, Liberty and the pursuit of Happiness."

Those words are truer today than they were when written. We have come a long way thus far: Slavery was abolished; Women can vote, The Civil Rights Act was passed, Couples of different races can marry and in some states we have Marriage Equality for same gender couples. We celebrate the progress!

In the midst of the rightful celebrations, we realize that we still have work to do: Religious intolerance is on the rise, women are still not equal to men in many ways, we continue to experience racial tension, marriage equality is not yet nationwide and we have a widening gap between those who have and those who do not.

As I reflect on Independence Day 2014 one thing that really stands out is that the nations founders created a system for government that was based on principles that were ahead of their time. At our core is a Divine Idea that all people are equal--all are expressions of One life. We are evolving into a truer version of who were are. Each step is important whether large or small. I celebrate the process that has brought us this far and I trust the the journey continues.

In the midst of the parties and fireworks, let us bow our heads for a moment and remember that freedom is not free. This land of the free and home of the brave is the most amazing place to call home.

America. She is large and contains multitudes...nod to Walt Whitman.